Let’s tackle each of these individually, beginning with the first one. This time, we will expand the statement of the theorem out a little.

The essence of this theorem is the last result: \(G/\ker\varphi\cong\im\varphi\). We can think of the two previous results as stepping stones that allow us to state this last result: the first condition allows us to construct \(G/\ker\varphi\) since we can only mod out by normal subgroups and the second condition can be thought of as a sanity check to ensure that our homomorphism maps into some group, which here happens to be a subgroup in \(H\).

So what is this theorem trying to say and why is this true? Essentially, this theorem allows us to convert any homomorphism into an isomorphism, an incredibly useful tool. To see how the isomorphism is constructed, we may first look at a visual representation of \(G\) and \(\varphi\).

The elements of \(G\) can first be thought of as a collection of dots, which are then sorted into buckets by \(\varphi\) based on where they are mapped to in \(H\). Note that \(\varphi\) is not necessarily surjective. 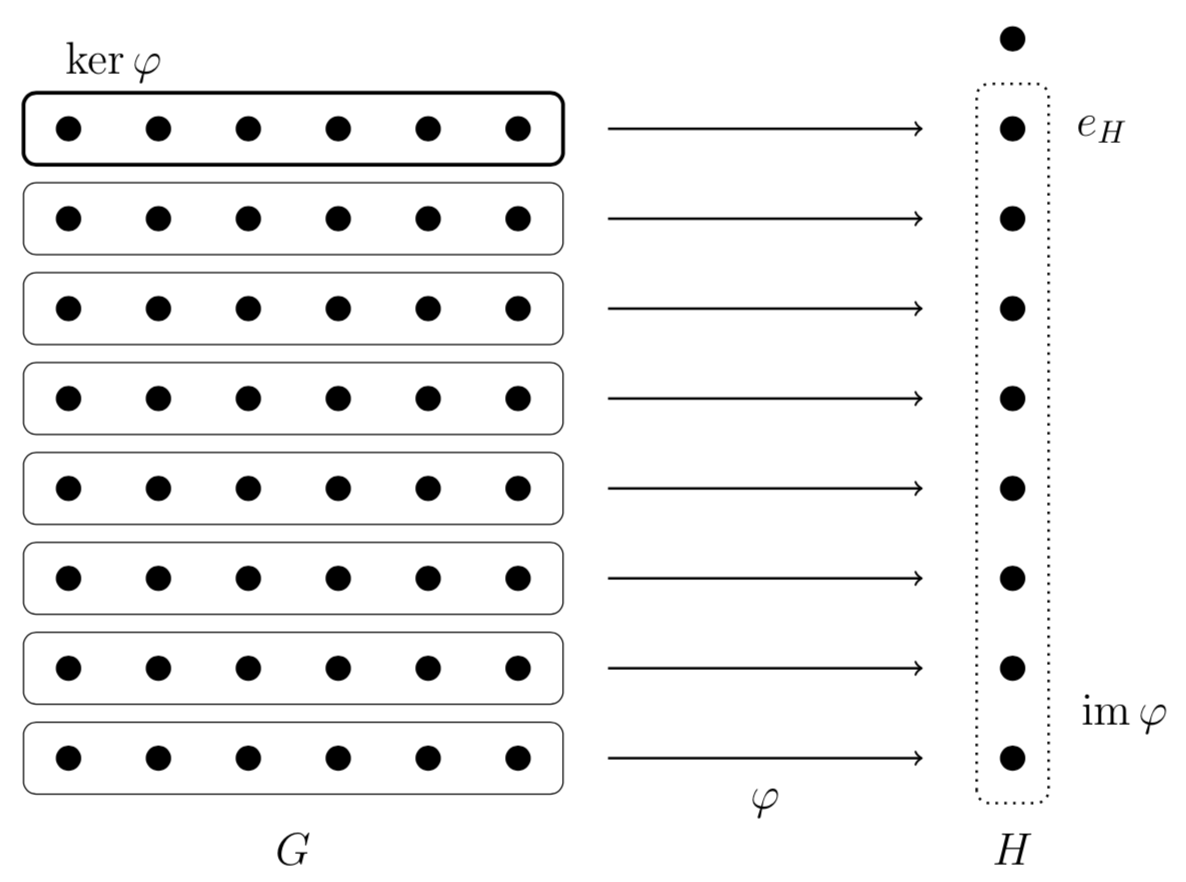 Note that this partitions the elements of \(G\) into cosets of \(\ker\varphi\) because the elements that map to the identity \(e_H\) in \(H\) is by definition \(\ker\varphi\). The key insight here is that we can interpret \(\varphi\) in a way that gives us a bijection. Let’s take a look at this picture:

Let’s move on to the second isomorphism theorem.

We again think of the elements of \(G\) as a collection of dots. This time, we focus on the subgroup \(AB\) and we partition its elements into cosets of \(A\) and \(B\). Since \(B\) is normal, we can consider some homomorphism \(\varphi\) that has \(B\) as its kernel. This gives us the following diagram. 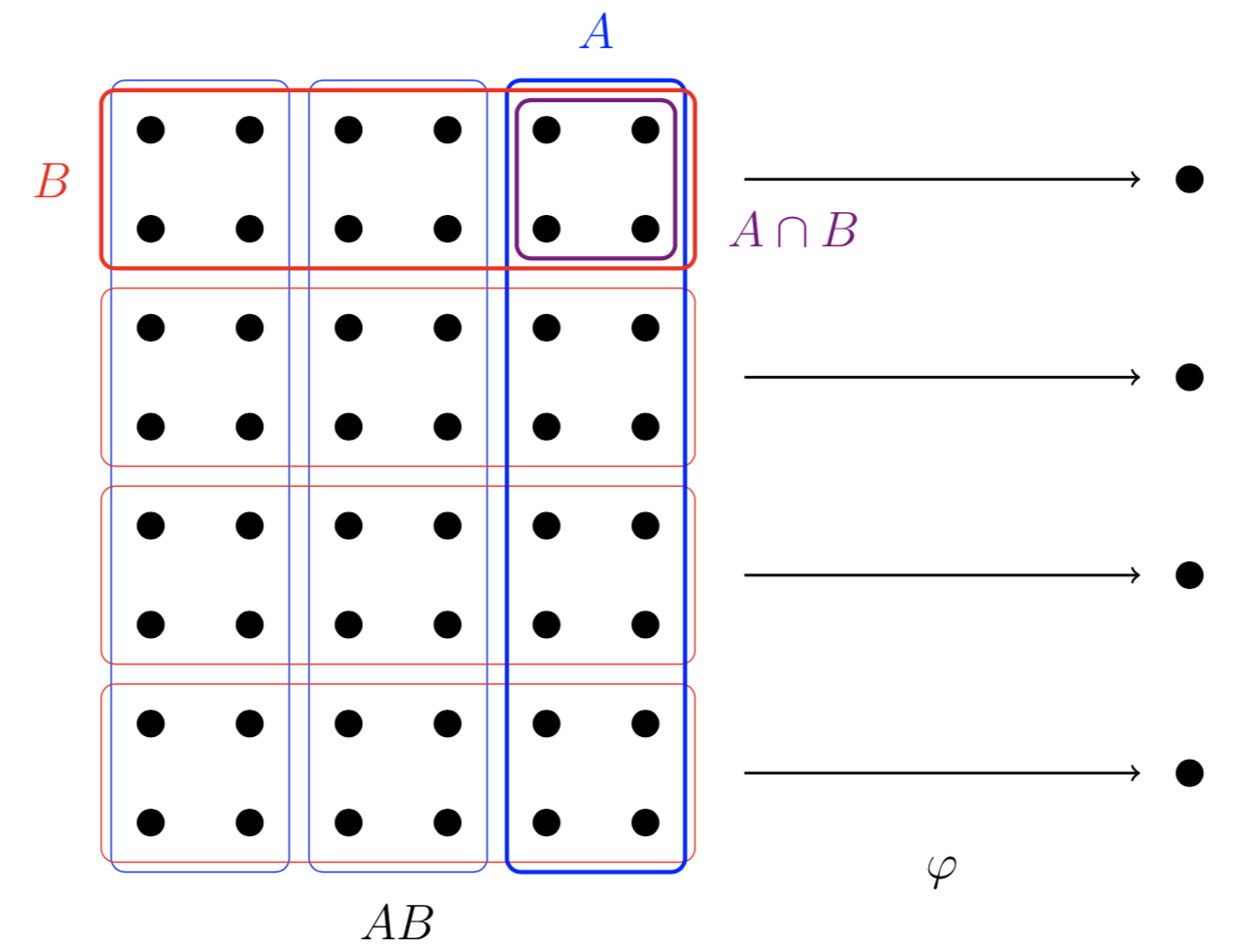 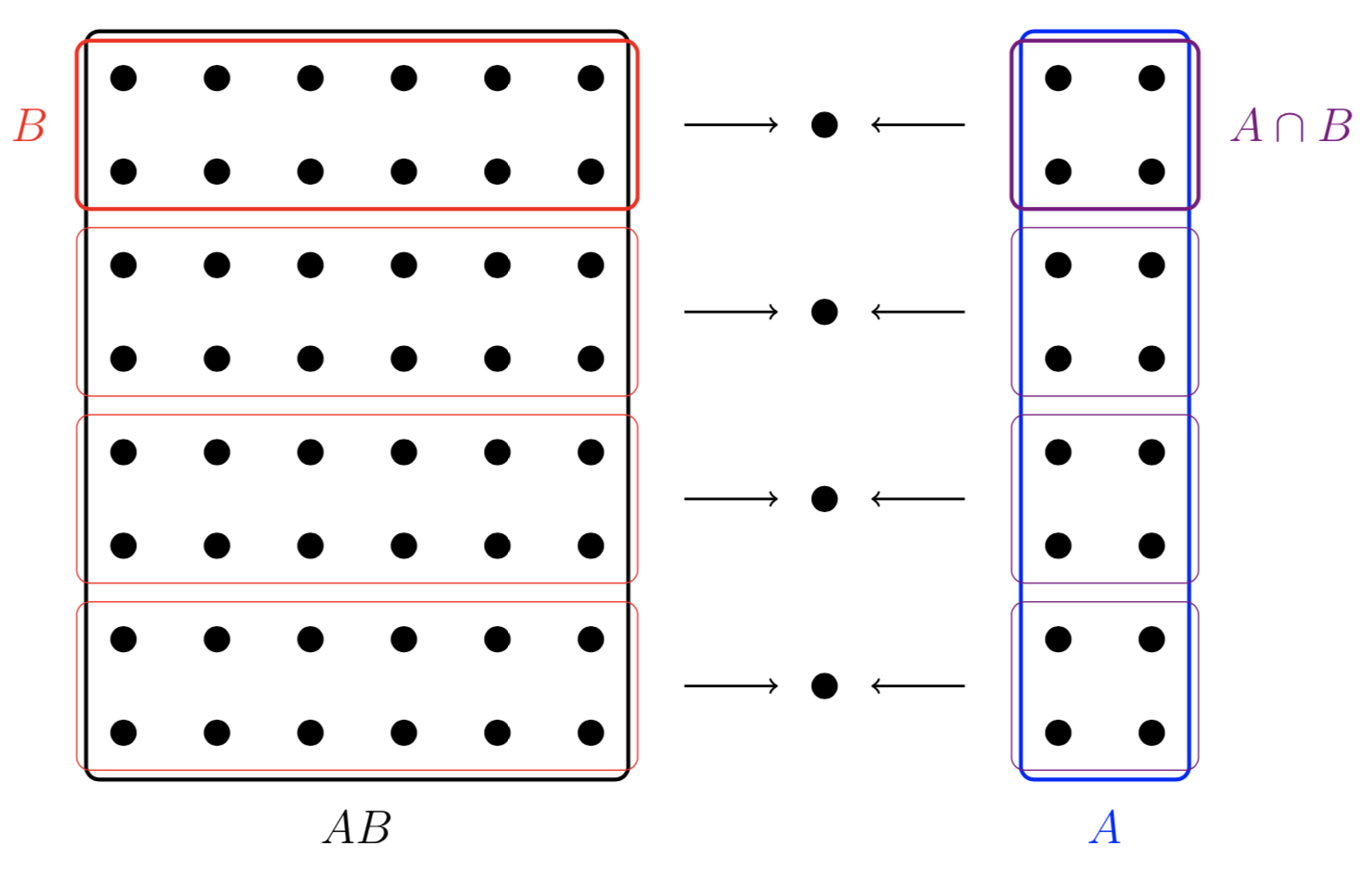 Finally, we look at the third isomorphism theorem. 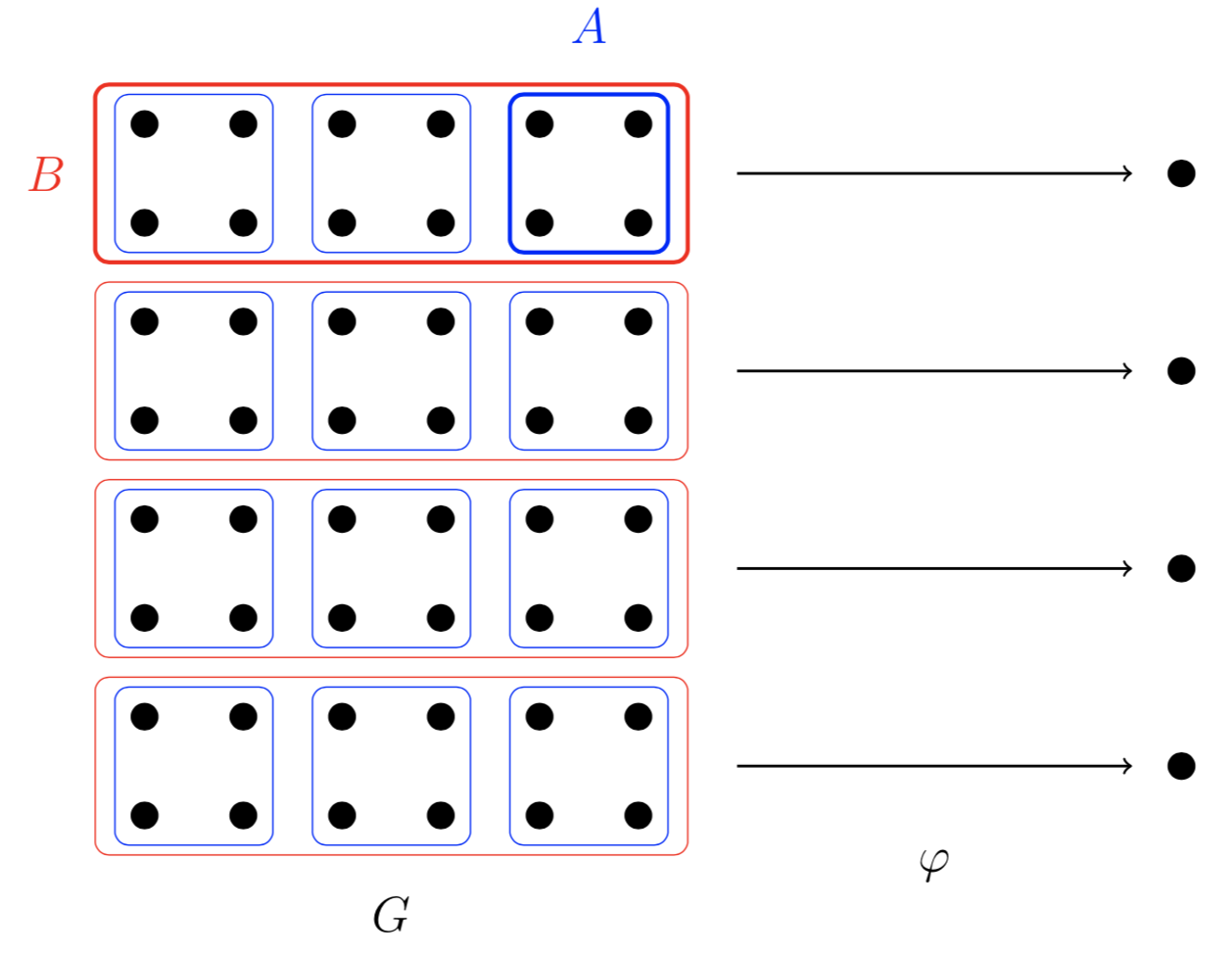 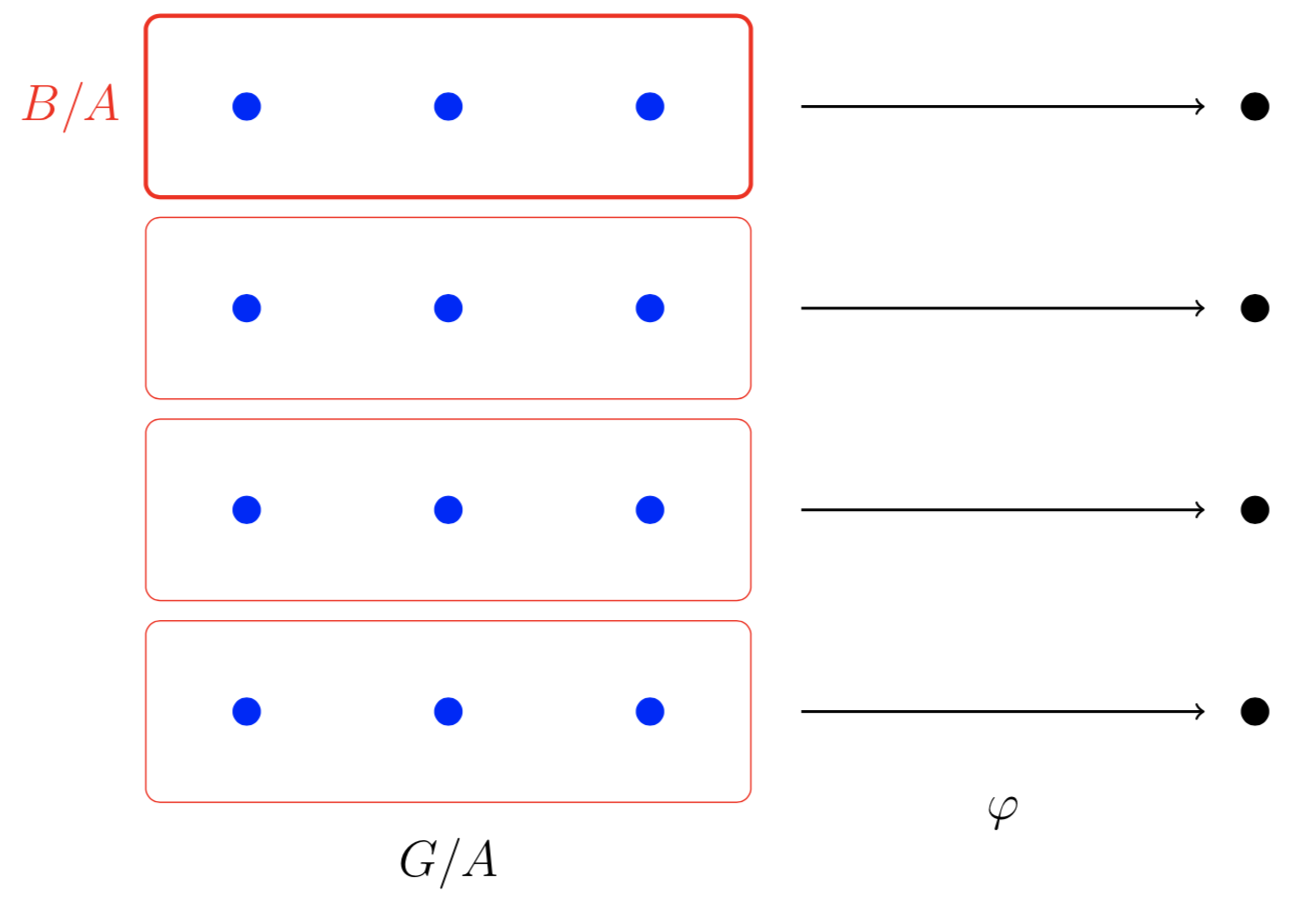 Hopefully, this article was able to help you understand and appreciate the isomorphism theorems more.